This article will explain 6 important concepts Stack , heap , value types , reference types , boxing and unboxing. This article starts first explaining what happens internally when you declare a variable and then it moves ahead to explain 2 important concepts stack and heap. Article then talks about reference types and value types and clarifies some of the important fundamentals around them.

Finally the article concludes by demonstrating how performance is hampered due to boxing and unboxing with a sample code.

Watch my 500 videos on various topics like design patterns,WCF, WWF , WPF, LINQ ,Silverlight,UML, Sharepoint ,Azure,VSTS and lot more
click here , you can also catch me on my trainings @ click here. 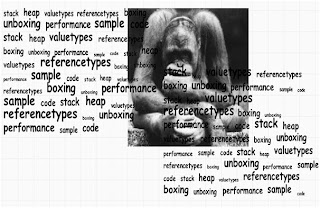 What goes inside when you declare a variable?

That was a simple explanation of what happens in the memory, but depending on what kind of data type your variable is allocated on that type of memory. There are two types of memory allocation stack memory and heap memory. In the coming sections we will try to understand these two types of memory in more details.

In order to understand stack and heap, let’s understand what actually happens in the below code internally.


It’s a 3 line code so let’s understand line by line how things execute internally.
Line 1:- When this line is executed compiler allocates a small amount of memory in to memory type called as stack. Stack is responsible of keeping track of running memory needed in your application.

Line 3:- In line 3 we have a created an object. When this line is executed it creates a pointer on the stack and the actual object is stored in a different type of memory location called as ‘Heap’. ‘Heap’ does not track
running memory it’s just pile of objects which can reached at any moment of time. Heap is used for dynamic memory allocation.

One more important point to note here is reference pointers are allocated on stack. The statement, Class1 cls1; does not allocate memory for an instance of Class1, it only allocates a stack variable cls1 (and sets it to null). The time it hits the new keyword it allocates on "HEAP".
Exiting the method (The fun):- Now finally the execution control starts exiting the method. When it passes the end control it clears all the memory variables which are assigned on stack. In other words all variables which are related to ‘int’ data type are de-allocated in ‘LIFO’ fashion from the stack.
The BIG catch – It did not de-allocate the heap memory. This memory will be later de-allocated by “GARBAGE COLLECTOR”. 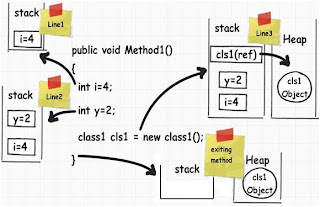 Now many of our developer friends must be wondering why two types of memory, can’t we just allocate everything on just one memory type and we are done.
If you look closely primitive data types are not complex, they hold single
values like ‘int i = 0’. Object data types are complex, they reference other
objects or other primitive data types. In other words they hold reference to other multiple values and each one of them must be stored in memory. Object types need dynamic memory while primitive needs static type memory. If the requirement is of dynamic memory it’s allocated on a heap or else it goes on a stack.
Image taken from http://michaelbungartz.wordpress.com/

Now that we have understood the concept of ‘Stack’ and ‘Heap’ it’s time to understand the concept of value types and reference types.
Value types are types which hold both data and the memory on the same location. While a reference type has a pointer which points to the memory location.
Below is a simple integer data type with name ‘i’ whose value is assigned to an other integer data type with name ‘j’. Both these memory values are allocated on the stack.
When we assign the ‘int’ value to the other ‘int’ value it creates a complete different copy. In other word if you change either of them the other does not change. These kinds of data types are called as ‘Value types’. 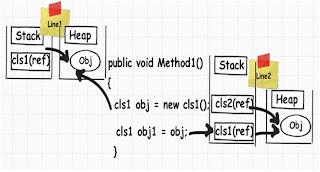 So which data types are ref type and value type? 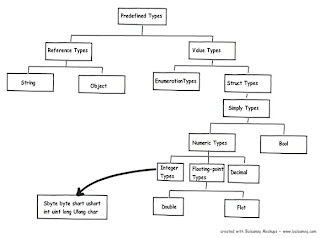 WOW, you have given so much knowledge, so what’s the use of it in actual
programming. One of the biggest implications is to understand the performance hit which is incurred due to data moving from stack to heap and vice versa.
Consider the below code snippet. When we move a value type to reference type the data is moved from the stack to the heap. When we move reference type to a value type the data is moved from the heap to the stack.
This movement of data from the heap to stack and vice-versa creates a
performance hit.

When the data moves from value types to reference types its termed as ‘Boxing’ and the vice versa is termed as ‘UnBoxing’. 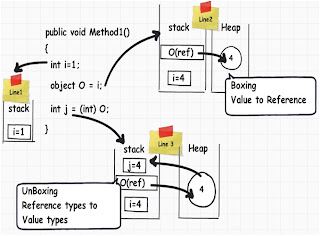 If you compile the above code and see the same in ILDASM you can see in the IL code how ‘boxing’ and ‘unboxing’ looks, below figure demonstrates the same. 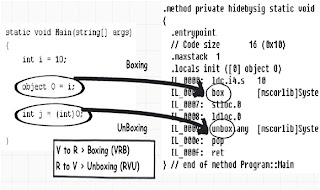 Performance implication of Boxing and unboxing

In order to see how the performance is impacted we ran the below two
functions 10,000 times. One function has boxing and the other function is simple. We used a stop watch object to monitor the time taken.
The boxing function was executed in 3542 MS while without boxing the code was executed in 2477 MS. In other words try to avoid boxing and unboxing. In project you always need boxing and unboxing , use it when it’s absolutely necessary.
With the same article the sample code is attached which demonstrates this performance implication. 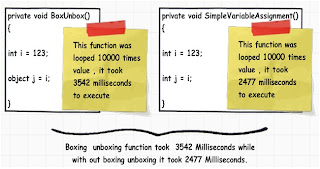 Currently I have not put a source code for unboxing but the same hold true for the same. You can write the same and experiment it by using stopwatch class.
Posted by Shivprasad Koirala at 11:26 AM

Hi,
This blog is good for concept. I fould one mistake in document, in the last line

"while unboxing was executed in 2477 MS"

It is not unboxing it is just simple execution.

this is really nice article....