6 important uses of Delegates and Events

Once we are done with all fundamentals we will summarize the six important uses of delegates.

This is a small Ebook for all my .NET friends which covers topics like WCF,WPF,WWF,Ajax,Core .NET,SQL etc you can download the same from http://tinyurl.com/4nvp9t
or else you can catch me on my daily free training @ http://tinyurl.com/39m4ovr

Abstraction problems of methods and functions

Before we move ahead and we talk about delegates let’s try to understand what problem does delegate solve. Below is a simple class named ‘ClsMaths’ which has a simple ‘Add’ function. This class ‘ClsMaths’ is consumed by a simple UI client. Now let’s say over a period of time you add subtraction functionality to the ‘ClsMaths’ class, your client need to change accordingly to accommodate the new functionality.

In other words addition of new functionality in the class leads to recompiling of your UI client. 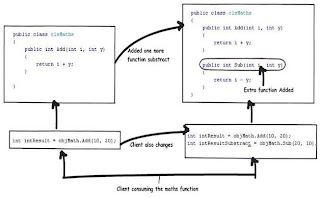 In short the problem is that there is a tight coupling of function names with the UI client. So how can we solve this problem?. Rather than referring to the actual methods in the UI / client if we can refer an abstract pointer which in turn refers to the methods then we can decouple the functions from UI. 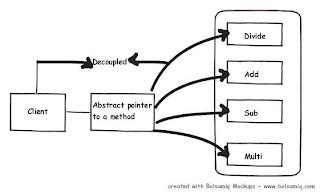 Ok, now that we have understood the tight coupling problem and also the solution, let’s try to understand how we can define a simple delegate.


How to declare a delegate?


To implement a delegate is a four step process declare, create, point and invoke. 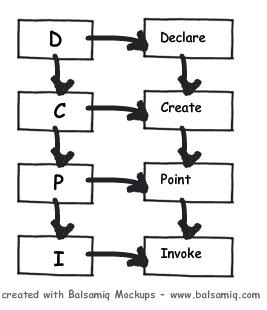 The first step is to declare the delegate with the same return type and input parameters. For instance the below function ‘add’ has two input integer parameters and one integer output parameter. 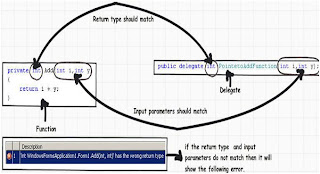 Finally we need to invoke the delegate function using the “Invoke” function
of the delegate.
Below figure sums up how the above four step are map with the code snippet. 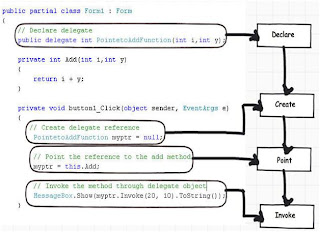 In order to decouple the algorithm changes we can expose all the below arithmetic function through an abstract delegate. 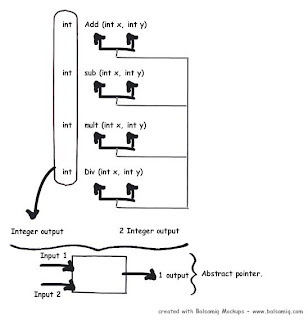 So the first step is to add a generic delegate which gives one output and takes two inputs as shown in the below code snippet.

The next step is to expose a function which takes in operation and exposes an attached delegate to the UI as shown in the below code snippet.


Below is how the complete code snippet looks like. All the algorithm functions i.e. ‘Add’ , ‘Sub’ etc are made private and only one generic abstract
delegate pointer is exposed which can be used to invoke these algorithm function.

So at the client side the calls becomes generic without any coupling with the actual method names like ‘Add’ , ‘Sub’ etc.

In our previous example we have see how we can create a delegate pointer to a function or method. We can also create a delegate which can point to multiple functions and methods. If we invoke such delegate it will invoke all the methods and functions associated with the same one after another sequentially.

Below is the code snippet which attaches 2 methods i.e. method1 and method2 with delegate ‘delegateptr’. In order to add multiple methods and function we need to use ‘+=’ symbols. Now if we invoke the delegate it will invoke ‘Method1’ first and then ‘Method2’. Invocation happen in the same sequence as the attachment is done.


So how we can use multicast delegate in actual projects. Many times we want to create publisher / subscriber kind of model. For instance in an application
we can have various error logging routine and as soon as error happens in a application you would like to broadcast the errors to the respective components. 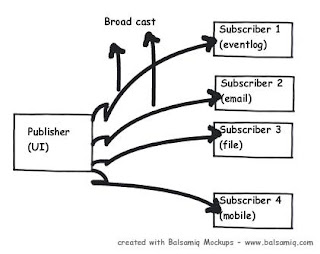 At the form level of ‘Form1’ (this form will be propagating events to form2 and form3) we will first define a simple delegate and reference of the delegate as shown in the code snippet below. This delegate will be responsible for broadcasting events to the other forms.

In the form load we invoke the forms and attach ‘CallMe’ method which is present in both the forms in a multicast fashion ( += ).


Finally we can invoke and broadcast method calls to both the forms.

The first problem with above code is that the subscribers (form2 and form3) do not have the rights to say that they are interested or not interested in the events. It’s all decided by ‘form1’.

We can go other route i.e. pass the delegate to the subscribers and let them attach their methods if they wish to subscribe to the broadcast sent by ‘form1’. But that leads to a different set of problems i.e. encapsulation violation.

Events help to solve the delegate encapsulation problem. Events sit on top of delegates and provide encapsulation so that the destination source can only listen and not have full control of the delegate object.
Below figure shows how the things look like:-
• Method and functions are abstracted /encapsulated using delegates
• Delegates are further extended to provide broadcasting model by using multicast delegate.
• Multicast delegate are further encapsulated using events. 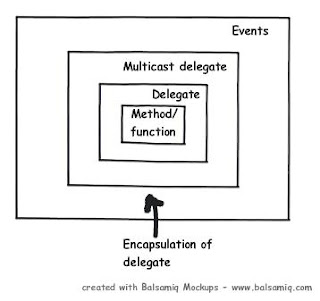 So let’s take the same example which we did using multicast delegates and try to implement the same using events. Event uses delegate internally as event provides higher level of encapsulation over delegates.

So the first step in the publisher (‘Form1’) we need to define the delegate and the event for the delegate. Below is the code snippet for the same and please do notice the ‘event’ keyword.

We have defined a delegate ‘CallEveryOne’ and we have specified an event object
for the delegate called as ‘EventCallEveryOne’.


At the subscriber side i.e. (Form2 and Form3) attach the method to the event
listener.


This code will show the same results as we have got from multicast delegate
example.


Difference between delegates and events

So what’s really the difference between delegates and events other than the sugar coated syntax of events. As already demonstrated previously the main difference is that event provides one more level of encapsulation over delegates. 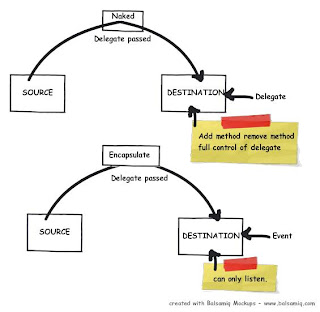 
One of the other uses of delegates is asynchronous method calls. You can call methods and functions pointed by delegate asynchronously.

Asynchronous calling means the client calls the delegate and the control is returned back immediately for further execution. The delegate runs in parallel to the main caller. When the delegate has finished doing his work he makes a call back to the caller intimating that the function / subroutine has completed executing. 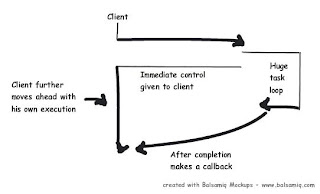 
Below is the code snippet for ‘CallbackMethod’. This method will be called
once the delegate finishes his task.


Summarizing Use of delegates

There are 6 important uses of delegates:-

1. Abstract and encapsulate a method (Anonymous invocation)
This is the most important use of delegates; it helps us to define an abstract
pointer which can point to methods and functions. The same abstract delegate can
be later used to point to that type of functions and methods. In the previous
section we have shown a simple example of a maths class. Later addition of new
algorithm functions does not affect the UI code.
2. Callback mechanismMany times we would like to provide a call back mechanism. Delegates can be
passed to the destination and destination can use the same delegate pointer to
make callbacks.
3. Asynchronous processingBy using ‘BeginInvoke’ and ‘EndInvoke’ we can call delegates asynchronously.
In our previous section we have explained the same in detail.
4. Multicasting - Sequential processingSome time we would like to call some methods in a sequential manner which
can be done by using multicast delegate. This is already explained in the
multicast example shown above.
5. Events - Publisher subscriber model
We can use events to create a pure publisher / subscriber model.


Difference between delegates and C++ pointer

C++ pointers are not type safe, in other words it can point to any type of
method. On the other hand delegates are type safe. A delegate which is point to
a return type of int cannot point to a return type of string.
Posted by Shivprasad Koirala at 4:45 AM

Gud one for getting on delegates and events