Introduction and Goal
What is MEF (Manage extensibility framework)?
How can we implement MEF in .NET 4.0?
Can we see a simple example of MEF with the above 3 steps?
Should data types of import and export match?
Can we connect import and export via some defined contract rather than .NET data types?
This looks very much similar like DI and IOC, why the re-invention?
Can they work hand on hand?
We would like to see a sample in Silverlight?
Can we also see a simple Sample in WPF?
How about some Sample in ASP.NET?
Reference


This FAQ deep dives in to .Net 4.0 MEF fundamentals (Import and Export) and also explains when to use MEF over DI / IOC. This article also explains step by step on how to use MEF in various technologies like Silverlight, WPF and ASP.NET.

Please feel free to download by free .NET Ebook which has 400 questions and answers in WCF,WPF,WWF,Silverlight and lot more http://www.questpond.com/SampleDotNetInterviewQuestionBook.zip


What is MEF (Manage extensibility framework)?

For instance you have application which you would want different vendors to connect with their features and extend your application. 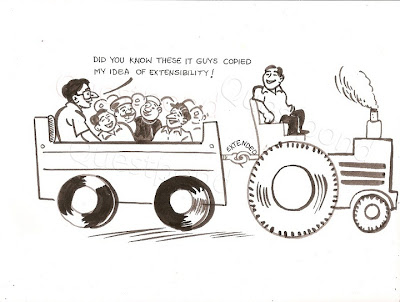 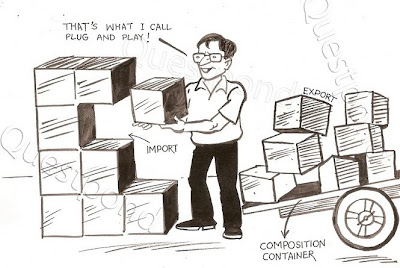 Can we see a simple example of MEF with the above 3 steps?

We will create a simple class which will have a hook to import string message. In other words any class who has functionality of string message implementation can attach themself to the hook and extend that class.
Step 1:- Create the socket (Import)
The first step is to create a place holder / hook / socket where other components can plug in.
Import the below namespaces needed by MEF.

To define a hook we have created an empty property called as “ImportMessage”
and we have attributed the same with “Import” attribute.

Step 3: Connect and Extend it (Compose it)
Ok so we have created the socket, the plug and it’s time to connect these both. Below goes the code for the same.


In other words export, import and compose, Below figure summarizes the same. 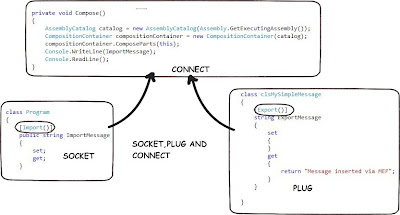 
Should data types of import and export match?

The types of import and export should match or else while composing you will get an error as shown below. Can incompatible socket and plug connect?. 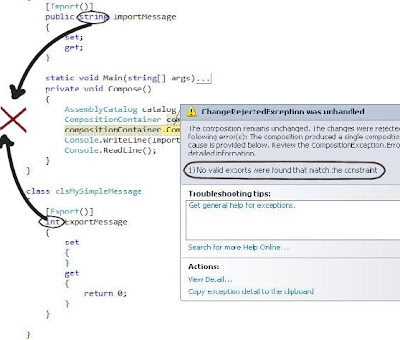 Can we connect import and export via some defined contract rather than .NET data types?


In real world your hooks would be some real world contract types like customer, supplier etc rather than simple .NET data types like string, int, Boolean etc. In order to create a real word kind of hook in MEF, we need to first create a contract using interfaces as shown below.


We need to ensure that the hooks defined in both import and export attribute are of the same interface type as shown below. The binding logic using
composition container does not change; it’s the same as described in the previous section.

This looks very much similar like DI and IOC, why the re-invention?

In case you are new to DI/IOC read here .http://www.codeproject.com/KB/aspnet/IOCDI.aspx

Both of them overlap each other to a very great extent but the GOALS are different. DI and IOC is meant for decoupling while MEF is for extensibility. The below requirement will throw more light on how to decide which solution to go for:-

Below table summarizes the same in a detail manner.

If you have still questions post it to Glenn Block over here
http://codebetter.com/blogs/glenn.block/archive/2009/08/16/should-i-use-mef-for-my-general-ioc-needs.aspx


Can they work hand on hand?


Let say you have an application and following is your requirement.

The way to approach the first requirement is by using your favorite IOC container and the second requirement is where MEF fits.
Below diagram shows how they fit in to the whole game.
The end GOAL is more important when making a choice between them. 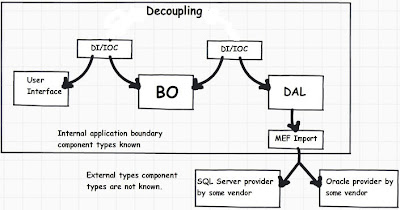 Below is a nice article by Mr. Nicholas Blumhardt which shows how MEF and IOC fit in.
http://blogs.msdn.com/b/nblumhardt/archive/2009/03/16/hosting-mef-extensions-in-an-ioc-container.aspx

We would like to see a sample in Silverlight?


The main important steps do not change.
Step 1:- Create the socket (Import)

Define the Silverlight items you want to import. In the below code snippet we have defined a collection of user control type.

Step 2:- Create and attach the plug (Export)
Use “Export” to define the plug. For the current scenario we have defined two Silverlight user control with export attribute exposing “UserControl” as the type.


Step 3: Connect and Extend it (Compose it)
Use the “SatisfyImport” to compose the exports and import.

If you run the same you should see the composed user controls in the main Silverlight UI container as shown below.

The whole Silverlight picture looks something as shown below. 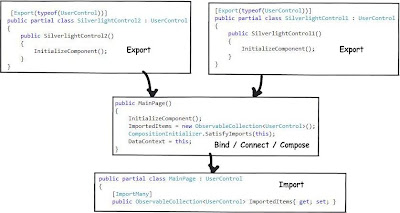 Can we also see a simple Sample in WPF?

How about some Sample in ASP.NET?

Hansel and Glenn talks about difference between MEF and IOC on http://www.hanselminutes.com/default.aspx?showID=166
10 reasons why to use MEF http://csharperimage.jeremylikness.com/2010/04/ten-reasons-to-use-managed.html
MEF for beginners http://blogs.microsoft.co.il/blogs/bnaya/archive/2009/11/28/mef-for-beginner-concept-part-1.aspx
As said by Sreeni Ramadurai its import, export and bin.
http://mstecharchitect.blogspot.com/2010/02/mef-managed-extensibility-framework.html
Simple article on MEF
http://www.sidarok.com/web/blog/content/2008/09/26/what-is-this-managed-extensibility-framework-thing-all-about.html
Posted by Shivprasad Koirala at 11:13 PM