Introduction
What is CAS?

What is evidence in CAS?
What is a permission and permission set?
What is code group?
So how does CAS work on runtime?
Can we see a quick demo of CAS?
What is CASPOL.exe?
When I open a .NET 4.0 DLL/Assembly using CASPOL it throws an error?
Can you throw some more light on the security transparent model?
A demo of security transparent model can really make things clear?
What is the concept of sandboxing?
Security transparent is good when we control the code what about external DLL?
But why this change, what was the problem with CAS?
So how can we give code access after .NET 4.0 and later?
What if I still want to use CAS in .NET 4.0?
References

Many developers understand the concept of CAS (Code access security) but very few know how to implement the same. This article will discuss and demonstrate practically all those aspects of CAS which you have ready only in theory till today.
This article first starts with the basic concepts of CAS like evidence, permission, code groups and caspol.exe. It then moves ahead to demonstrate how CAS can be implemented in real world. This article further talks about ground up changes made in .NET 4.0 for CAS. In those regards it discusses about security transparent model and sandboxing.

Bet me this article is your last chance to see CAS in actual action....enjoy.

This is a small Ebook for all my .NET friends which covers topics like WCF, WPF, WWF, Ajax, Core .NET, SQL etc you can download the same from here
or else you can catch me on my daily free training @ here

Code Access security is a security model which grants or denies permission to your assembly depending on evidences like from where the code has emerged, who the publisher is? , strong names etc.

What is evidence in CAS?

When you want to execute any code in your environment you would first like to know from where the code came from. Depending from where it came from, you would then would like to give him access rights. For instance a code compiled from your own computer would have greater rights than code downloaded from the internet.

In order to know the same we need to probe the assembly / exe / dll and get evidences like who is the publisher of the code , from which site has this code from , from which zone has it come from ( internet , intranet etc) etc.


What is code group?

Code groups are nothing but categories of code. These categories are defined by permissions and evidence values. When .NET code runs it’s assigned to a code group by the evidences which are collected during runtime.
For instance there are various default code groups like My computer zone , internet zone , intranet zone etc.

My computer zone code group is allocated to code who evidence says that they are assemblies which are installed on the computer and they have permission set ‘internet’ which has various permissions like file dialog , execute , user interface , printing etc. 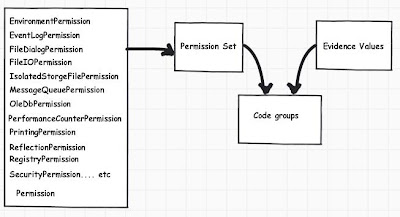 So how does CAS work on runtime?

• Evidences are gathered about the assembly. In other words from where did this assembly come?

• Depending on code group the assembly is allocated security rights.

• Using the security rights the assembly is run with in those rights. 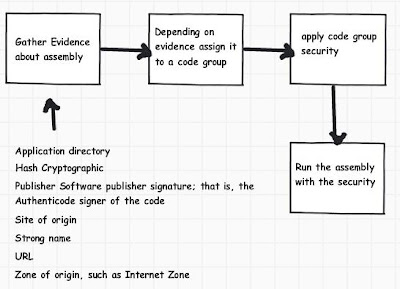 Can we see a quick demo of CAS?

If you want to allocate rights to an assembly we need to install the .NET configuration tool and click on trust assembly menu as shown in the below figure. 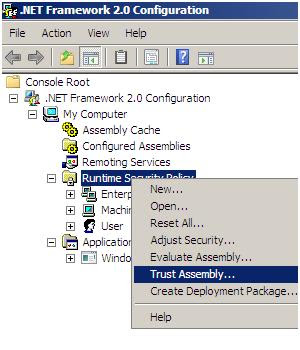 Once you trust the assembly you can adjust the trust to full trust or none. 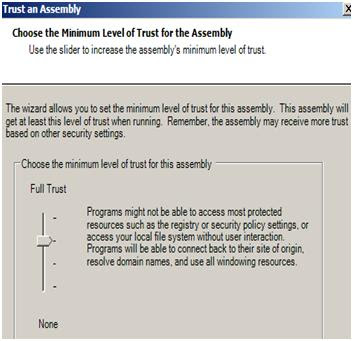 Please do see the below complete video which explains how we can assign
permission, permission set,code group and evidence to an exe or an assembly. 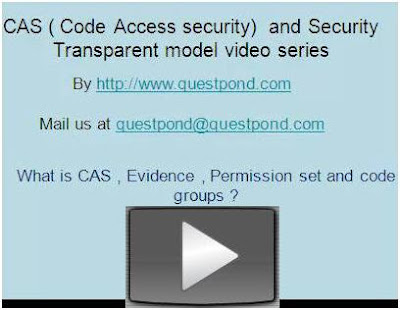 When I open a .NET 4.0 DLL/Assembly using CASPOL it throws an error?

If you try to open a .NET 4.0 DLL in configuration wizard you will get an error as shown below. 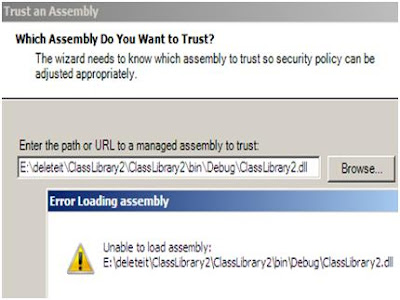 CAS is completely deprecated in .NET 4.0, there are two big changes:-


• Granting of permission is no more dependent on the .NET CAS, it’s now the job of the host. So the host who runs the .NET DLL will define what kind of rights will the assembly have. NET Framework 4.0 comes with CAS a disabled which means all applications started via Windows Explorer or the command prompt run with full trust. Hosted .NET applications, those running inside Internet Explorer or ASP.NET, will run at the trust level granted by their host, being partially trusted.


Can you throw some more light on the security transparent model?

If for some reason the transparent code wants to call security critical code it can go via the bridge security safe critical code. 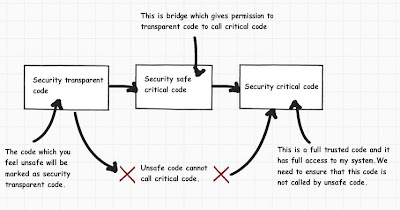 Below is a simple video where we have created a simple code marked it as security critical and then we tried calling the same from security transparent code and we get an error. 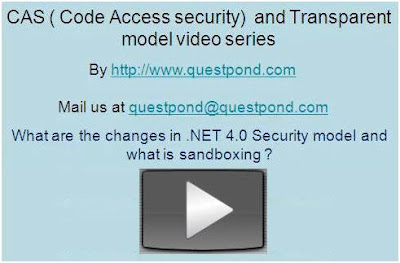 What is the concept of sandboxing?

The next question answers the same.

Security transparent is good when we control the code what about external DLL?

The security transparent code is good when we control the code but what if get assembly which is a third party. In those situations you can use the concept of sandboxing. One of the important points to note is that CAS is deprecated and not removed completely.
So if you have third party DLL you can create your own appdomain and assign permission sets so that your 3rd party DLL runs under a control environment. Below is a simple code snippet which shows how we can do things. The below code snippet, creates an application domain, allocates permissions for execution and user interface display only.

We then try to do something funny like popping up a file brows dialog box and we end up with error as shown in the below figure.


Step 2:- Apply the above defined permission set to the newly created application domain as shown in the below code snippet.


Step 3:- Create the instance and try calling the ‘ShowDialog’ function.
If you try to execute the open dialog it will pop up an error as shown in the below code. 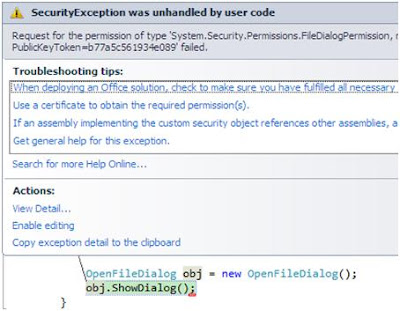 But why this change, what was the problem with CAS?

• First thing CAS was not easy, all those cryptic steps of creating code groups, and permission sets etc eats your energy completely.
• If you have to move the assembly to a different computer you need to do the whole rework again.

• The worst part CAS does not work on unmanaged code. I am dead sure it’s always possible you will download exe which is not written in .NET.

So how can we give code access after .NET 4.0 and later?

• Type gpedit.msc into the Run or Search box on your Start menu, click OK, and
Group Policy will open. 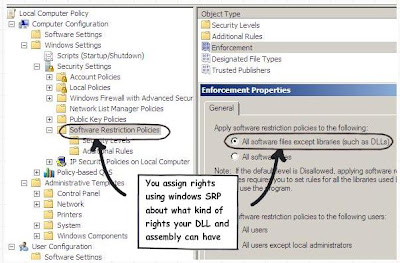 “<NetFx40_LegacySecurityPolicy>” configuration element lets you specify that a process or library uses CAS policy. When you activate this element, the policy and evidence overloads will work as they did in older versions of the .NET framework.

Posted by Shivprasad Koirala at 6:43 AM

This is a question for the webmaster/admin here at computerauthor.blogspot.com.

Can I use some of the information from this post above if I provide a backlink back to your site?