4 real time use of Partial classes and partial methods

In this article we will first start with fundamentals of partial classes and methods and then discuss the 4 real time use of the same.

I have also created a video of the same here where I have discussed about partial classes and shown the real time use of the same.

During compilation these files gets compiled in to single class internally. So when you create an object of the customer class you will be able to see methods lying in both the physical files. For instance you can see “Add” method belongs to “customer1.cs” and “Delete” method belongs to “customer2.cs” , but when the customer object is created we can see both “Add” and “Delete” methods. 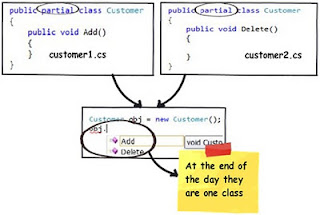 In the below figure you can see we have defined “Validate” method in “Customer1.cs” and this validate method is implemented in “Customer2.cs”. Please note the partial keywords attached to both of these methods.

The custom logic is written in the “.aspx.cs” file while the auto generated logic is in “.aspx.designer.cs” file as shown in the below figure.

As a developer you would like the auto generated code to do his work i.e. generate code when you drag and drop a button the ASP.NET designer. 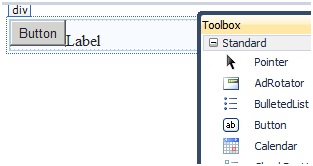 Below is how the code snippet of the auto generated code looks like.

At the same time you would also like to customize the code in some other file so that the auto generation part is not disturbed. For the same ASP.NET provides the “.aspx.cs” file which is a partial class where in you can go put your own custom logic.

This is only possible when the class is split in two physical files but united via the partial keyword. So if you see any ASP.NET behind code class files it’s marked by the word partial.
So by using the partial keyword in ASP.NET the Microsoft team has made VS and developer work side by side thus not fiddling with each other’s code and thus increasing productivity. 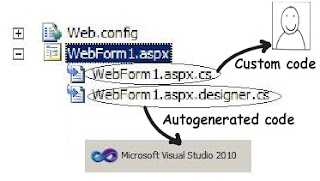 Use number 2:- LINQ and Entity framework

LINQ and EF also use partial classes and methods heavily because of the auto generation nature of these technologies. So when you drag tables in these framework they create auto generated classes as shown in the below figure.

In the below figure you can see how the auto generated code has partial classes and partial methods. 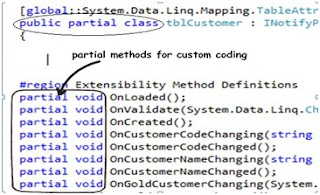 The partial methods later can be extended to put custom logic. For instance you can see in the below code for the above autogenerated class “tblCustomer” we have used partial methods to override the “OnCustomerCodeChanged” event to ensure that customer code is not more than 8 length.

The other important use of partial classes is for better maintenance of the project. If you have large classes with lots of methods as shown in the below figure , it’s a bit pain to maintain those classes. 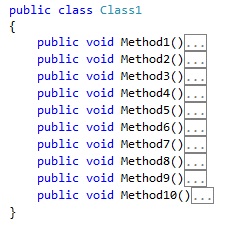 By using partial classes you can split them in to physical files as shown in the below figure thus making your project better and easy to maintain. 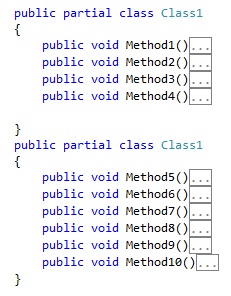 Use number 4:- Multiple people working on the same class 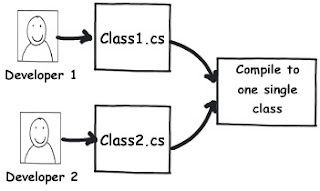 The last and final real time I see of partial classes is when we want simultaneously two developers to work in the same class. I agree this can be a very rare use as there are better options like using a version control software like TFS or Sub version, but in case you want something quick and local this option is not bad at all.

For other author's blog on important .NET interview questions articles.

Posted by Shivprasad Koirala at 11:19 PM