C# and .NET interview questions with answers: - How can we mark a method as deprecated?

This question is taken from the book .NET interview questions written by Shivprasad Koirala.

Many times you want to warn developers that some methods or classes should not be used as they are either replaced or going to be replaced with new versions. This is possible by using the “[Obsolete]” attribute.

In the below class we have a method called as “Method1”. Now let’s say you have created a better improvised version of “Method1” called as “NewMethod1”. You want to send an alert to all your developers who are consuming this class to use “NewMethod1” rather than using “Method1”.

So you can decorate “Method1” with the “[Obsolete]” attribute as shown in the below code.

Now if any programmer consumes the above class he will get a warning message as shown in the below figure. 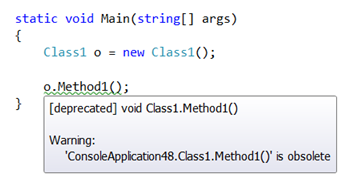 In case you want to show some message to the developers you can pass the message in the “Obsolete” attribute as shown in the below code snippet.

If you want to be bit strict and do not developers to use that method, you can pass ‘true” to the “Obsolete” attribute as shown in the below code.

Now in case developers try to make a call to “Method1”   they will get error and not just a simple warning.

Also visit our site from more such c# interview question with answers videos.