Point 1 :- Comparison on the basis of Equality

To compare equality between variables C# has provided two ways of doing comparison “==” and an overloaded method “equals()”. Most of the developers use “==” and “Equals” is hardly discussed.

So in this small note we will discuss about differences between them and when to use what.

Point 1 :- Comparison on the basis of Equality

Answering to the point “There is no difference between equality comparison using “==” and “Equals()”, except when you are comparing “String” comparison.

The above rule is respected by both “==” and “Equals”.

When you compare value types / primitive data types ( int , double etc) either by using “==” or “Equals” it’s always based on content. In the below code you can see both comparison methods will show as “true”.

Now when you compare objects they are compared on the basis of reference (internal memory pointer). Below obj and obj1 comparison either through “==” or “Equals” will be false. So in the below code even though both the object have property name as “Shiv” still it shows unequal. Because the comparison is based on internal memory reference which is different for “obj” and “obj1”.

But the below code will display true as the pointer points to same object.

Now strings are immutable objects or reference types so they should be checked using the rules of reference types. In other words in the below scenario when we assign value to “str” it creates a string object and in heap has “test” stored. When you now assign “str1” this a different object so it should be a different instance.

But look at the value, it the same. So C# string follows interning rule. In other words if the content is same “str” and “str1” they point to the same memory location and data. So both “==” and “Equals” will be true.

But now look at the below code where we are explicitly creating new separate objects of string with same value. We are forcing and overriding interning behavior of string.In the below code “==” will return false even though the content is same while “Equals” will return true. This is one place where the equality behavior differs.

The next point which makes them different is when do type checks happen. “==” does type checking during compile time while “Equals” is more during runtime. You can see in the below code how “==” is showing a warning message with green sign saying that you are comparing different types and you can have issues. “Equals” does not show any such warnings.

“==” works with nulls but “Equals” crashes when you compare NULL values , see the below print screen.

Now comparison is of two types one is purely based on content and reference, means computer based comparison and other is based on semantics. Semantics means the actual meaning of a thing. For example 1 <> 70 numerically ( technically) but 1 $ = 70 Rs in real world semantically.

So if we list down all the point the final conclusion is the below table.


See the following practical video on understanding the difference between == and .Equals :- 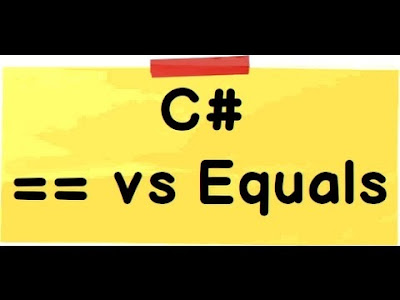 CodeProject
Posted by Shivprasad Koirala at 7:22 AM