C# and .NET interview questions: What is Delay signing?

During development process you will need strong name keys to be exposed to developer which is not a good practice from security aspect point of view. In such situations you can assign the key later on and during development you can use delay signing
Following is process to delay sign an assembly:
• First obtain your string name keys using SN.EXE.
• Annotate the source code for the assembly with two custom attributes from
System.Reflection: AssemblyKeyFileAttribute, which passes the name of the file
containing the public key as a parameter to its constructor. AssemblyDelaySignAttribute, which indicates that delay signing, is being used by passing true as a parameter to its constructor. For example as shown below:


The compiler inserts the public key into the assembly manifest and reserves
space in the PE file for the full strong name signature. The real public key
must be stored while the assembly is built so that other assemblies that
reference this assembly can obtain the key to store in their own assembly
reference.
• Because the assembly does not have a valid strong name signature, the verification of that signature must be turned off. You can do this by using the –Vr option with the Strong Name tool. The following example turns off verification for an assembly called myAssembly.dll.

• Just before shipping, you submit the assembly to your organization signing
authority for the actual strong name signing using the –R option with the Strong
Name tool. The following example signs an assembly called myAssembly.dll with a
strong name using the sgKey.snk key pair.

You can view video on regular expressions as follows: - 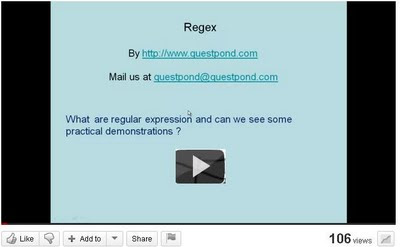 Posted by Shivprasad Koirala at 12:05 AM