SQL Server Interview Question and answers:- Triggers, Instead of triggers, after triggers, inserted and deleted tables?

Triggers are special kind of stored procedure which have logic's.These logics can be executed after or before data modification happens on a table.There are two types of triggers “Instead of triggers" and "After triggers". 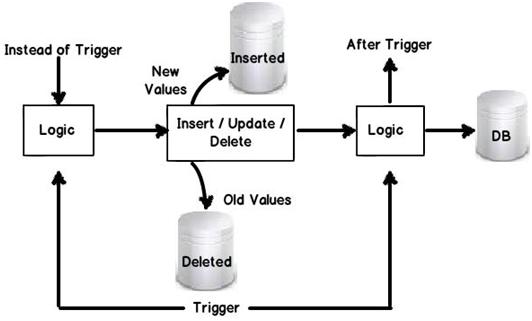 In what scenarios will you use instead of trigger and after trigger?

You will use "INSTEAD trigger" to take alternative actions before the update happens.

Some of the uses of instead of trigger's are:-
•Reject updates which are not valid.
•Take some alternative action if any error occurs.
•To implement cascading deletes.For instance you want to delete a customer record.But in order to delete the customer record you also have to delete address records. So you can create a instead of trigger which will first delete the address table before executing delete on customer table.

While "AFTER trigger" is useful when you want to execute trigger logic after the data has been updated.

Some uses of after triggers are:-

•For recording Audit trail where you want new and old values to be inserted in to audit table.
•Updating values after the update has happened.For instance in a sales table if number of products and per product is inserted, you can create an after trigger which will calculate the total sales amount using these two values.

What are inserted and deleted tables?

Also watch my most asked SQL Server interview question video on:- What is the difference between clustered and non-clustered indexes?

Posted by Shivprasad Koirala at 10:12 PM

sir my name is venu am learning .net am fresher sir plz send the asp.net& C#.NET full note with exampls