What is CSRF attack and how can we prevent the same in MVC?

CSRF (Cross site request forgery) is a method of attacking a website where the attacker imitates a.k.a forges as a trusted source and sends data to the site. Genuine site processes the information innocently thinking that data is coming from a trusted source.

For example conside the below screen of a online bank. End user’s uses this screen to transfer money.

Below is a forged site created by an attacker which looks a game site from outside, but internally it hits the bank site for money transfer.

The internal HTML of the forged site has those hidden fields which have the account number and amount to do money transfer.

Now let’s say the user has logged in to the genuine bank site and the attacker sent this forged game link to his email. The end user thinking that it’s a game site clicks on the “Play the Ultimate Game” button and internally the malicious code does the money transfer process. 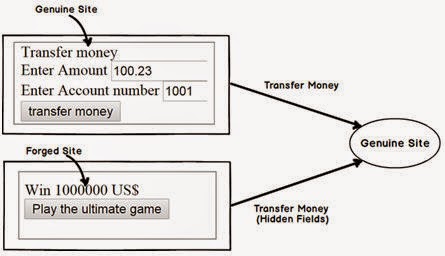 So a proper solution to this issue can be solved by using tokens: - 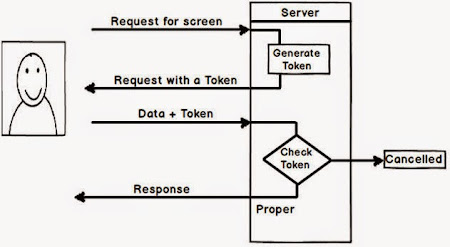 Implementing token is a two-step process in MVC: -

Second in the HTML UI screen call “@Html.AntiForgeryToken()” to generate the token. 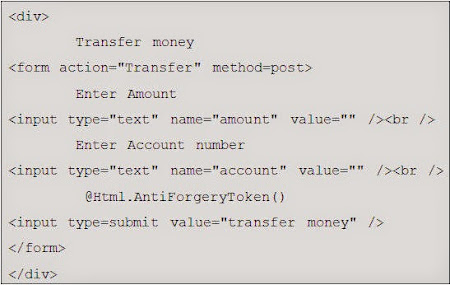 So now henceforth when any untrusted source send a request to the server it would give the below forgery error.

If you do a view source of the HTML you would find the below verification token hidden field with the secret key.

CodeProject
Posted by Shivprasad Koirala at 1:35 AM