Lot of times we come across C# fundamentals which are bit confusing and one such concept which is discussed a lot is Out VS Ref. So this small blogpost would make a full attempt to simplify the OUT vs REF concept.

Out and Ref are keywords which you need to worry when you want to get MULTIPLE values from a function. It helps you to define how data would be passed from caller to the callee and vice versa.

For example take the case of a simple “Add” function below. It has only one output so with just a single return call things work perfectly well.


But now lets do something more complicated. In the below function we need to get 4 outputs or putting in other words we have four OUT parameter values. This is where OUT keyword comes to help.


When you use OUT keyword you are indicating that you are expecting output from the function but you do not intend to pass data to the function. It is just ONE WAY :- so the Caller get data from the Callee.

So to indicate this one-way data transfer you need to use the OUT keyword on the Callee as shown below.


Note :- If you are specifying a variable as OUT and also trying to set data while calling, the passed DATA WILL BE DISCARDED inside the method / function.

Now let us take a scenario of a swapping number function code as shown below. In this scenario we want that the function should take “num1” and “num2” values and update the swapped values in the same two variables.


For that we need use the REF keyword as shown below.


From the caller side we need to again use the REF keyword as shown below.


In REF the data will be passed to the function / method and when the callee method updates the variables it will update the caller variables as well. 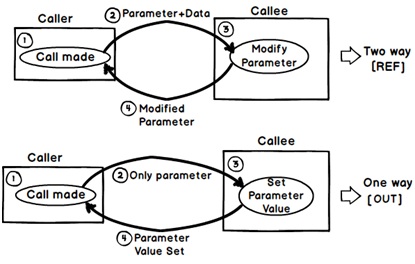 Below is a visual diagram which explains the difference between REF and OUT. In REF Parameter + Data is passed while in OUT only parameter is passed and data is set from the callee.

Below is one such concept which is not known to many developers, the C# yield keyword. Below is a simple video of the same which explains the same in a practical manner.

Labels: C# Out vs REF, Out keyword, ref