Out and REF in C#

Out and REF are one of those most confused topics in C#. In this small article we will try to simplify the same.

There are three important points to remember about OUT and REFand once you understand these three points you would never have problem with OUT and REF.

Point number 1:- By default variables are passed BYVAL to methods and functions. Out and Ref helps to pass variable BY REF (By reference) .
Let us try to understand the above point. Consider the below code snapshot where we have the “Main” method and its calling “SomeFunction” method and its passing “OutSideVar” variable to “SomeFunction”.

Now by default only value of “OutSideVar” will be copied to the method so any changes in “InsideVar” variable change will have no affect outside. You can see after the function call “OutSideVar” still has value “20”. In other words by default the values are passed BY VAL. 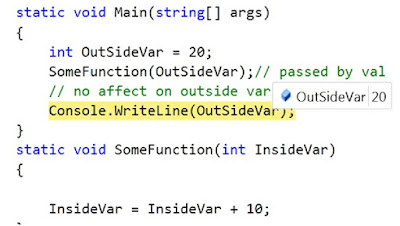 So if we summarize in a normal situation data is passed BY VAL , from the caller to callee. Any modifications done in the callee will not be reflected to the caller.

Point number 2:- When we mark parameters with REF, reference of the variable is passed to the function / method and any modification in that method and function will affect to the outside variable.
In the below code you can see we have marked variablesusing the REF keyword and you can see how the changes within the function modifies the outside variable also. This is happening because now variable is passed by reference. 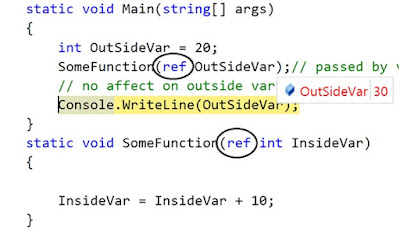 Summarizing in this scenario DATA + REFERENCE is passed to the function and any modification inside the function affects the outside variable. 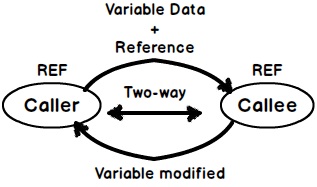 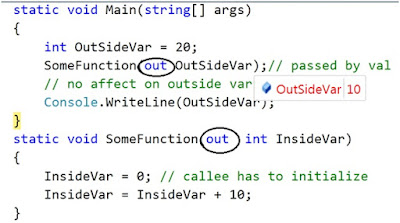 So summarizing what we have learnt:-
Below image summarizes what we talked in the above article. 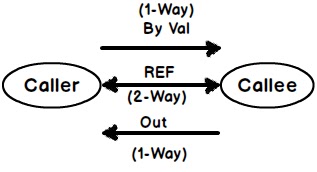 Below is a nice C# video which explain Out Vs Ref.

CodeProject
Posted by Shivprasad Koirala at 6:15 AM