(A) Can you explain bridge pattern? 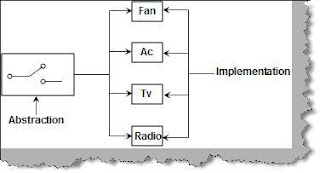 Figure: - Abstraction and Implementation
Let’s try to code the same switch and equipment example. First thing is we segregate the implementation and abstraction in to two different classes. Figure ‘Implementation’ shows how we have made an interface ‘IEquipment’ with ‘Start()’ and ‘Stop()’ methods. We have implemented two equipments one is the refrigerator and the other is the bulb. 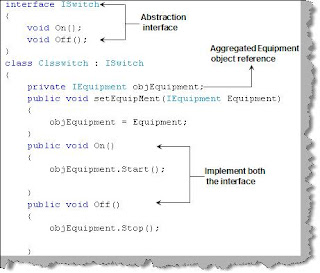 Finally we see the client code. You can see we have created the implementation objects and the abstraction objects separately. We can use them in an isolated manner.

(A) Can you explain composite pattern?

Many times objects are organized in tree structure and developers have to understand the difference between leaf and branch objects. This makes the code more complex and can lead to errors.
For example below is a simple object tree structure where the customer is the main object which has many address objects and every address object references lot of phone objects. 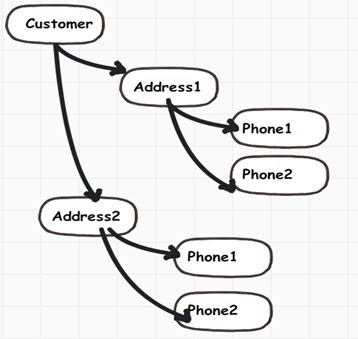 Figure: - General Process
Now let’s say you want to insert the complete object tree. The sample code will be something as shown below. The code loops through all the customers, all addresses inside the customer object and all phones inside the address objects. While this loop happens the respective update methods are called as shown in the below code snippet.

The problem with the above code is that the update vocabulary changes for each object. For customer its ‘UpdateCustomer’ , for address its ‘UpdateAddress’ and for phone it is ‘UpdatePhone’. In other words the main object and the contained leaf nodes are treated differently. This can lead to confusion and make your application error prone.
The code can be cleaner and neat if we are able to treat the main and leaf object uniformly. You can see in the below code we have created an interface (IBusinessObject) which forces all the classes i.e. customer, address and phone to use a common interface. Due to the common interface all the object now have the method name as “Update”.
In order to implement composite pattern first create an interface as shown in the below code snippet.


(I) Can you explain decorator pattern?

There are situations where we would like to add dynamic stacked behavior to a class on runtime.
The word stack is an important word to note. For instance consider the below situation where a hotel sells bread meals. They have four important products and the order can be placed using the below combination:-
In other words the order process behavior and the cost of the order changes on runtime depending on the type of the combination. 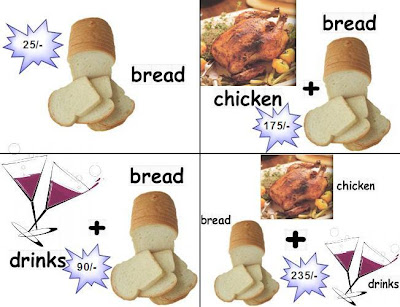 Figure: -
Below is a simple order with only bread which has two functions ‘prepare’ and ‘calculatecost’. We would like to add new products to this basic bread order dynamically on runtime depending on what the customer wants.
Below is a simple interface which every order will have i.e. Prepare and CalculateCost.
The base product is the bread which implements the Iorder interface. We would like to add new products to the bread order and change the behavior of the complete order.
We can alter the bread order dynamically using decorator pattern. To implement decorator pattern is a 5 steps process.
Step1:- Create a decorator class which aggregates the object / interface for which we need to add the behavior dynamically.
This decorator class will house the object and any method calls to the main object will first invoke all the housed objects and then the main object.
So for instance if you are calling the prepare method, this decorator class will invoke all the prepare methods of the housed object and then the final prepare method. You can see how the output changes when decorator comes in to picture.

Step 2: - The housed object/ interface pointer needs to be initialized. We can do the same by using various means for the sample below we will just expose a simple constructor and pass the object to the constructor to initialize the housed object.
Step 3: - We will implement the Iorder interface and invoke the house object methods using the virtual methods. You can see we have created virtual methods which invoke the house object methods.
Step 4: - We are done with the important step i.e. creating the decorator. Now we need to create dynamic behavior object which can be added to the decorator to change object behavior on runtime.
Below is a simple chicken order which can be added to the bread order to create a different order all together called as chicken + bread order. The chicken order is created by inheriting from the order decorator class.
Any call to this object first invokes custom functionality of order chicken and then invokes the housed object functionality. For instance you can see When prepare function is called it first called prepare chicken functionality and then invokes the prepare functionality of the housed object.
The calculate cost also adds the chicken cost and the invokes the housed order cost to sum up the total.
Same way we can also prepare order drinks.
Step 5:- The final step is see the decorator pattern in action. So from the client side you can write something like this to create a bread order.
Below is how the output will be displayed for the above client call.
If you wish to create the order with chicken, drink and bread, the below client code will help you with the same.
For the above code below is the output which combines drinks + chicken + bread.
In other words you can now attach these behaviors to the main object and change the behavior of the object on runtime.
Below are different order combination we can generate , thus altering the behavior of the order dynamically.


(A) Can you explain Façade pattern? 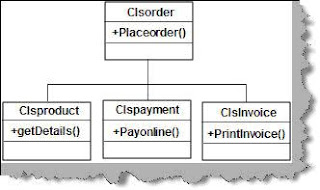 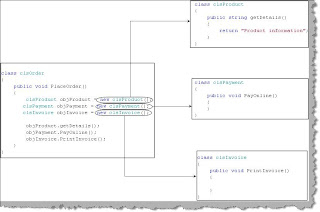 Figure :- Façade in action
Note:- You can find the façade code in the ‘façade pattern’ folder.

(A) Can you explain chain of responsibility ( COR)?

Chain of responsibility is used when we have series of processing which will be handled by a series of handler logic. Let’s understand what that means. There are situations when a request is handled by series of handlers. So the request is taken up by the first handler, he either can handle part of it or can not, once done he passes to the next handler down the chain. This goes on until the proper handler takes it up and completes the processing.

Figure: - Concept of Chain of Responsibility 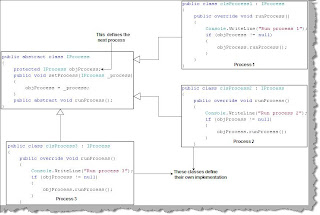 Figure: - COR client code
Note :- You can get the code for the same in C# in ‘ChainOfResponsibility’ folder.

(I) Can you explain proxy pattern?

Figure: - Proxy and actual object
The advantages of using proxy are security and avoiding duplicating objects which are of huge sizes. Rather than shipping the code we can ship the proxy, thus avoiding the need of installing the actual code at the client side. With only the proxy at the client end we ensure more security. Second point is when we have huge objects it can be very memory consuming to move to those large objects in a network or some other domain. So rather than moving those large objects we just move the proxy which leads to better performance.
Note :- You can get the proxy code in the ‘Proxy Pattern’ folder.

(B) Can you explain template pattern?

Template pattern is a behavioral pattern. Template pattern defines a main process template and this main process template has sub processes and the sequence in which the sub processes can be called. Later the sub processes of the main process can be altered to generate a different behavior.
For example below is a simple process to format data and load the same in to oracle. The data can come from various sources like files, SQL server etc. Irrespective from where the data comes, the overall general process is to load the data from the source, parse the data and then dump the same in to oracle. 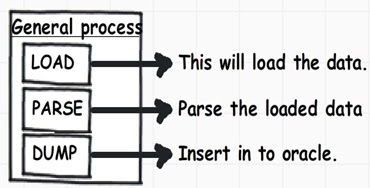 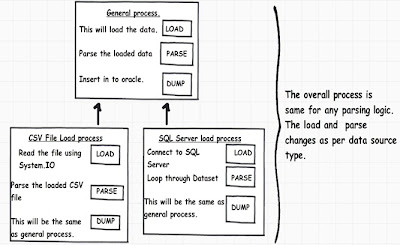 Figure: - Template thought Process
You can see from the above figure how we have altered ‘Load’ and ‘Parse’ sub process to generate CSV file and SQL Server load process. The ‘Dump’ function and the sequence of how the sub processes are called are not altered in the child processes.
In order to implement template pattern we need to follow 4 important steps:-
The ‘SqlServerParser’ inherits from ‘GeneralParser’ and overrides the ‘Load’ and ‘Parse’ with SQL server implementation.
The ‘FileParser’ inherits from General parser and overrides the ‘Load’ and ‘Parse’ methods with file specific implementation.
From the client you can now call both the parsers.
The outputs of both the parsers are shown below.

Posted by Shivprasad Koirala at 10:24 PM

Very nice - easy to follow, simple, and working. Thanks for the knowledge!
More templates easy to download

This information is very interesting, I really enjoyed, I would like get more information about this, because is very beautiful, thanks for sharing!

Thoroughly cooked, I entitled you all again. After my prolonged self-possession in the forum is not, I could not procure the open sesame to your olden profile and started a chic one. I'm glad that I am again with you.