This article discusses how we can use performance counter to gather data from an application. So we will first understand the fundamentals and then we will see a simple example from which we
will collect some performance data. 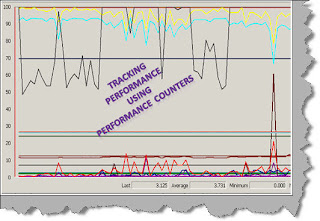 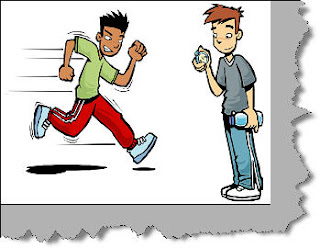 
Thanks Javier and Michael

I really do not have the intellectual to write something on performance counters. But reading the below articles I was able to manage something. So first let me thank these guys and then we can move ahead in the article.
Thanks a bunch Javier Canillas for creating the performance counter helper , it really eases of lot of code http://perfmoncounterhelper.codeplex.com/ Thanks Michael Groeger for the wonderful article, I took the code of counter creation from your article http://www.codeproject.com/KB/dotnet/perfcounter.aspx
I also picked up lot of pieces from
http://msdn.microsoft.com/en-us/library/system.diagnostics.performancecounter.aspx

At the end of the day its count, calculate and display
Any performance evaluation works on count, calculate and display. For instance if you want to count how many pages in memory where processed per second we first need to count number of pages and also how many seconds where elapsed. Once we are finished with counting we then need to calculate i.e. divide the number of pages by seconds elapsed. Finally we need to display the data of our performance. 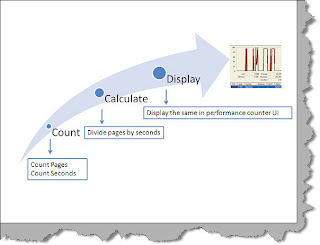 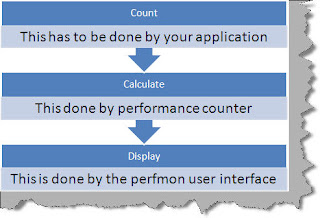 Performance counters are not magicians

Average values: - Sometimes instant / recent values do not really show the real picture. For instance just saying that application consumed 1 GB space is not enough. But if we can get some kind of average data consumption like 10 MB data was consumed per 1000 records probably you can get more insight of what is happening inside the application. Performance counter supports these kinds of measurement types by using average performanance counters like AverageBase, AverageTimer32, AverageCount64 etc.

Rate values: - There are situations when you want to know the rate of events with respect to time. For example you would like to how many records where processed per second. Rate counters help us to calculate these kinds of performance metrics. 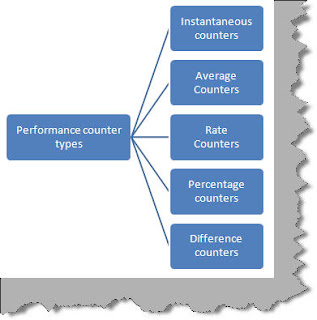 Example on which performance counter will be tested
In this complete article we will be considering a simple counter example as explained below. In this example we will have a timer which generates random number every 100 milliseconds. These random numbers are later checked to see if it’s less than 2. Incase its less than 2 then function ‘MyFunction’ is invoked. 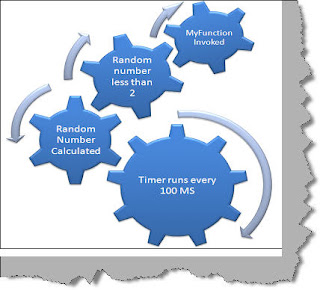 Below is the code where the timer runs every 100 milliseconds and calculates random number. If the random number is smaller than 2 we invoke the function ‘MyFunction’.


Below is the code for ‘MyFunction’ which is invoked when the value of random number is less than 2. The method does not do
anything as such. 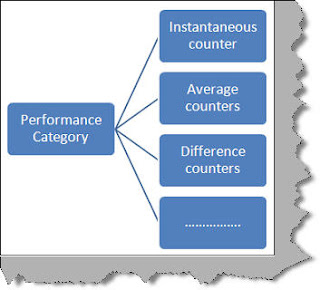 Below definitions are taken from http://msdn.microsoft.com/enus/library/system.diagnostics.performancecountertype.aspx.

NumberOfItems32:- An instantaneous counter that shows the most recently observed value.

NumberOfItems64:- An instantaneous counter that shows the most recently observed value. Used, for example, to maintain a simple count of a very large number of items or operations. It is the same as NumberOfItems32 except that it uses larger fields to accommodate larger values.

NumberOfItemsHEX32:- An instantaneous counter that shows the most recently observed value in hexadecimal format. Used, for example, to maintain a simple count of items or operations.

NumberOfItemsHEX64:- An instantaneous counter that shows the most recently observed value. Used, for example, to maintain a simple count of a very large number of items or operations. It is the same as NumberOfItemsHEX32 except that it uses larger fields to accommodate larger values.

Step 1 Create the counter: - For our current scenario ‘NumberOfItems32’ will suffice. So let’s first create ‘NumberOfItems32’ instantaneous counter. There are two ways to create counters one is through the code and the other is using the server explorer of VS 2008. The code approach we will see later. For the time we will use server explorer to create our counter. So open your visual
studio  click on view  server explorer and you should see the performance counters section as shown in the below figure. Right click on the performance counters section and select create new category. 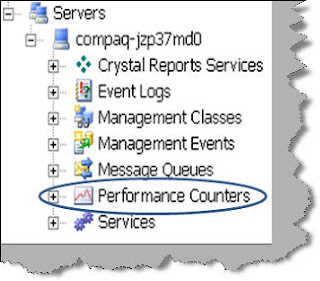 When we create a new category you can specify the name of the category and add counters in to this category. For the current example we have given category name as ‘MyApplication’ and added a counter type of ‘NumberOfItem32’ with name ‘NumberOfTimeFunctionCalled’. 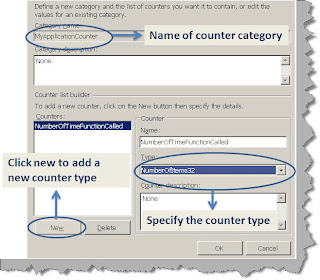 You need to mark ‘ReadOnly’ value as false so that you can modify the counter
value from the code. 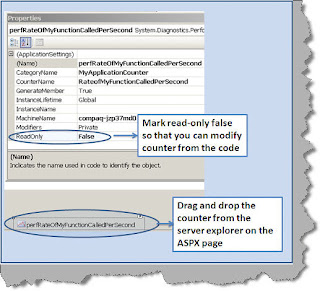 Step 3 Add the code to count the counter: -
Finally we need to increment the counter. We have first cleared any old values in the counter during the form load. Please note that counter values are stored globally so they do not do reset by themselves we need to do it explicitly. So in the form load we have cleared the raw value to zero.


Whenever the function is called we are incrementing the value by using ‘Increment’ method. Every call to the increment
function increases the number by 1. 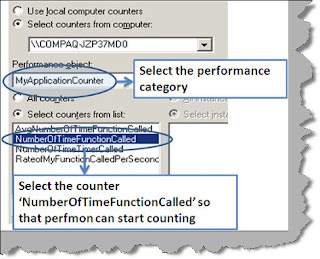 You can now view the graphical display as shown in the below figure. Ensure that your application is running because application emits data which is then interpreted by the performance monitor. 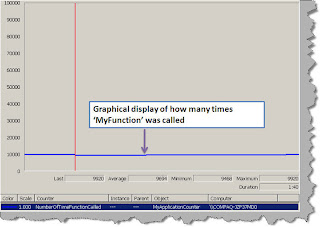 Above view is a graphical view of the same. To view the same in textual format you use the view report tab provided by performance monitor. You can see the report shows that ‘MyFunction’ was called 9696 times from the time application started.

In the previous section we have measured how many times ‘MyFunction’ was called. But this performance count does not really show any kind of measure. It would be great if we can also see the count of how many times the timer was called. Then later we can compare between the numbers of time timer was called and ‘MyFunction’ was called.So create an instantaneous counter and increment this counter when the timer fires as shown in the below code. 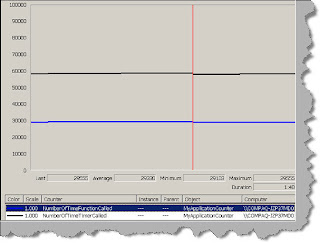 You need to add the ‘AverageBase’ counter after the ‘AverageCount64’ type counter or else you will get an error as shown below.


If you run the application in the view report mode you should see something as shown below. You can see on a average
‘MyFunction’ is called 0.5 times.

If you do the calculation you will get the same figure which is been calculated by the performance monitor.

From our sample we would now like to find out the rate of ‘MyFunction’ calls with respect to time. So we would like know how many calls are made every second. So browse to the server explorer and add ‘rateofCountsPerSecond32’ counter as shown in the below figure. Increase this counter every time ‘MyFunction’ is called.

If you run the application you should be able to see the ‘RateofMyFunctionCalledPerSecond’ value. Below is a simple report which shows the rate of counter data which was ran for 15 seconds. The total call made in this 15 second was 72. So the average call is 5 ‘MyFunction’ calls per second.

We have left percentage counters and difference counters as they are pretty simple and straightforward. In order to maintain this article to the point and specific I have excused both these counter types.
Adding counters by C# code
Till now we have added the performance counter using server explorer. You can also add the counter by code. The first thing is we need to import System.Diagnostics namespace.We then need to create object of ‘CounterCreationDataCollection’ object.


Create our actual counter and specify the counter type.

Do not use it in production

Oh yes, use it only when you are doing development. If you are using in production ensure that there is an enabling and disabling mechanism or else it will affect your application performance.

You can find the sample source code for the above performance counters discussed at you can download the source code from here
Posted by Shivprasad Koirala at 4:25 AM

Nice blog for getting knowledge on performance counters.......


It's really help for every developer.

Thanking you very much

Hi there all, I just registered on this amazing forum and wanted to say hiya! Have a fabulous day!

Genial dispatch and this enter helped me alot in my college assignement. Say thank you you on your information.