In this section we will discuss about how IOC and DI can help us build loosely coupled software architecture. I am not sure should we call this a design pattern or more of a approach. If you search around the web you will see lot of controversy on whether IOC is a design pattern or not. From my point of view it is a design pattern as it solves a problem context.
It would be great to see actual architectures implementing IOC using container oriented approaches. I am sure it will change the way we think about interaction between components.
Please feel free to download my free 500 question and answer videos which covers Design Pattern, UML, Function Points, Enterprise Application Blocks, OOP'S, SDLC, .NET, ASP.NET, SQL Server, WCF, WPF, WWF, SharePoint, LINQ, SilverLight, .NET Best Practices @ these videos http://www.questpond.com/
So let us understand in detail about IOC and DI.

Before even we get in to abbreviation of IOC and DIP, let’s first understand the problem. Consider the below example we have a customer class which contains an address class object. The biggest issue with the code is tight coupling between classes. In other words the customer class depends on the address object. So for any reason address class changes it will lead to change and compiling of ‘ClsCustomer’ class also. So let’s put down problems with this approach:
So if for any reason the address object is not able to create the whole customer class will fail in the constructor initialization itself.

The basic principle of IOC stands on the base of Hollywood principle (response given to amateurs auditioning in Hollywood):

Do not call us we will call you

Translating to bollywood (for struggling actors)

In other words it like address class saying to the customer class, do not create me I will create myself using some one else.

There are two principles of IOC:

Ok, now we know the problem, let’s try to understand the broader level solution. Let’s look at how we implement the solution for IOC. IOC is implemented using DI (Dependency injection). We have discussed on a broader level about how to inject the dependency in the previous sections. In this section we will dive deeper in to other ways of implementing DI.

In the further sections we will walkthrough the same in more detail. 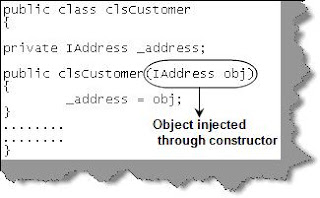 This is the most commonly used DI methodology. The dependent objects are exposed through set/get methods of classes. The bad point is because the objects are publicly exposed it breaks the encapsulation rule of object oriented programming. 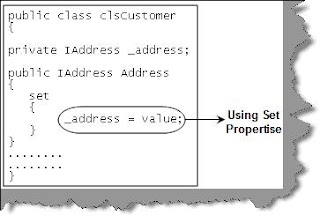 In this methodology we implement an interface from the IOC framework. IOC framework will use the interface method to inject the object in the main class. You can see in figure ‘Interface based DI’ we have implemented an interface ‘IAddressDI’ which has a ‘setAddress’ method which sets the address object. This interface is then implemented in the customer class. External client / containers can then use the ‘setAddress’ method to inject the address object in the customer object. 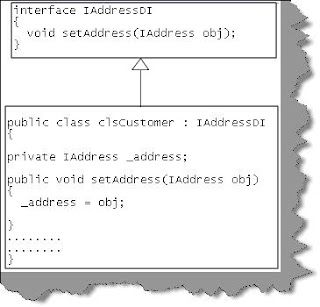 Now that we know the various types of DI to implement IOC. Its time to understand how we can actually implement these DI’s.

What is wrong with DI FACTORY?

The first thing which clicks to mind is, can't we achieve all the above things using factory. The main problem is all about one class doing the creational activity of its contained objects which leads to heavy coupling. Introducing factory can solve that to a great extent.

Here are the issues with factory which makes us force to think about some other solutions:

A container is an abstraction responsible for object management, instantiation and configuration. So you can configure the objects using the container rather than writing client code like factory patterns to implement object management. There are many containers available which can help us manage dependency injection with ease. So rather than writing huge factory codes container identifies the object dependencies and creates and injects them in appropriate objects. 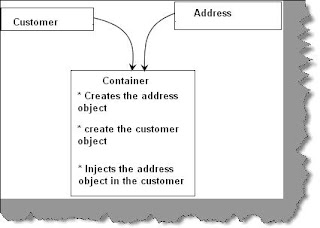 What we will do is cover the customer and address example using one of the container Windsor container, you can get more details about the container here. 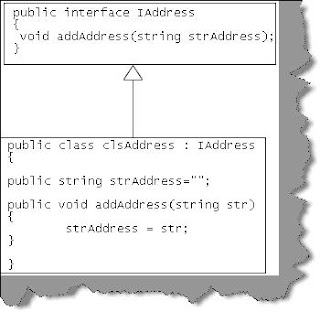 Figure: - Address interface
In the customer class we have passed the object through the constructor. 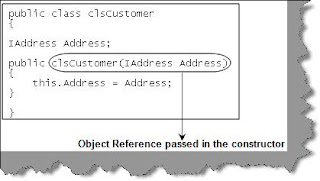 Figure: - Customer class
If we are said to write the client code. , it would be something as shown in figure ‘Client code’. In step 1 we create a concrete object and point the implementation to the interface IAddress. In step 2 we pass the interface object to customer class constructor while creating the object. 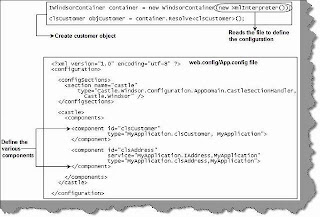 Posted by Shivprasad Koirala at 2:32 AM

This is really awesome. I have read tons of articles explaining IOC and DI, but this is the best in regard to simplicity and straightforward presentation.