(I) Can you explain state pattern?

Now let’s try to implement the same bulb sample in C#. Figure ‘State pattern in action’ shows both the class and the client code. We have made a class called as ‘clsState’ which has an enum with two state constants ‘On’ and ‘Off’. We have defined a method ‘PressSwitch’ which toggles its state depending on the current state. In the right hand side of the same figure we have defined a client which consumes the ‘clsState’ class and calls the ‘PressSwitch()’ method. We have displayed the current status on the textbox using the ‘getStatus’ function.

When we click the press switch it toggles to the opposite state of what we have currently.


(I) Can you explain strategy pattern?

Strategy pattern are algorithms inside a class which can be interchanged depending on the class used. This pattern is useful when you want to decide on runtime which algorithm to be used.

Let’s try to see an example of how strategy pattern works practically. Let’s take an example of a math’s calculation where we have strategies like add and substract. Figure ‘Strategy in action’ shows the same in a pictorial format. It takes two numbers and the depending on the strategy it gives out results. So if it’s an addition strategy it will add the numbers, if it’s a substraction strategy it will give the substracted results. These strategies are nothing but algorithms. Strategy pattern are nothing but encapsulation of algorithms inside classes. 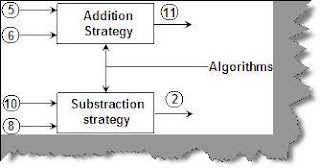 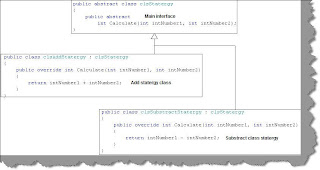 Figure: - Algorithms encapsulated
Now we define a wrapper class called as ‘clsMaths’ which has a reference to the ‘clsStatergy’ class. This class has a ‘setStatergy’ method which sets the strategy to be used. 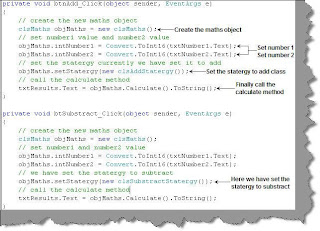 
(A) Can you explain visitor pattern?

Consider the below figure ‘Logic and data structure’ where we have a customer data structure. Every customer object has multiple address objects and every address object had multiple phone objects. This data structure needs to be displayed in two different formats one is simple string and second XML. So we have written two classes one is the string logic class and other is the XML logic class. These two classes traverse through the object structure and give the respective outputs. In short the visitor contains the logic. 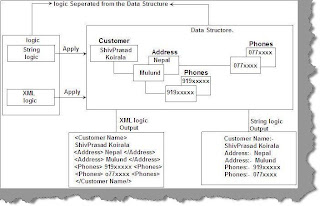 Let’s take the above customer sample and try to implement the same in C#. If you are from other programming you should be able to map the same accordingly. We have created two visitor classes one which will be used to parse for the string logic and other for XML. Both these classes have a visit method which takes each object and parses them accordingly. In order to maintain consistency we have implemented them from a common interface ‘IVisitor’. 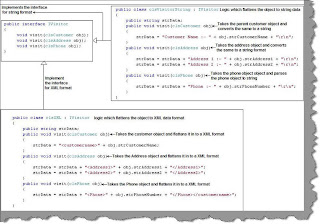 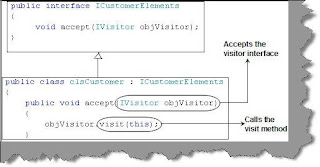 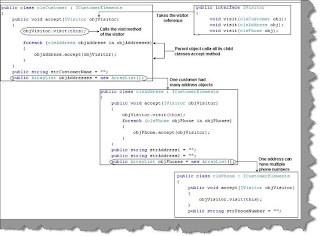 Figure: - Visitor client code
Note: - You can find a sample of the same in C# in the visitor folder of the CD. If you belong to some other programming domain you can map the same as the code is very generic.


(A) What the difference between visitor and strategy pattern?

Visitor and strategy look very much similar as they deal with encapsulating complex logic from data. We can say visitor is more general form of strategy.
In strategy we have one context or a single logical data on which multiple algorithms operate. In the previous questions we have explained the fundamentals of strategy and visitor. So let’s understand the same by using examples which we have understood previously. In strategy we have a single context and multiple algorithms work on it. Figure ‘Strategy’ shows how we have a one data context and multiple algorithm work on it. 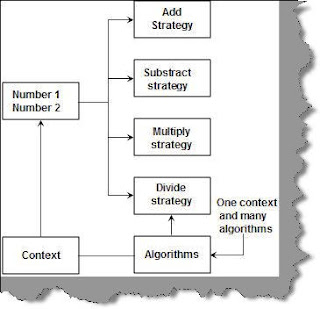 In visitor we have multiple contexts and for every context we have an algorithm. If you remember the visitor example we had written parsing logic for every data context i.e. customer, address and phones object. 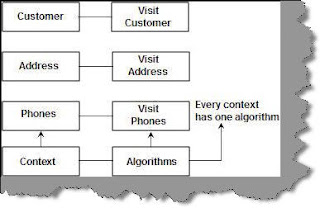 (A) Can you explain adapter pattern?

Figure ‘Object Adapter pattern’ shows a broader view of how we can achieve the same. We have a introduced a new wrapper class ‘clsCollectionAdapter’ which wraps on the top of the ‘clsStack’ class and aggregates the ‘push’ method inside a new ‘Add’ method, thus making both the classes compatible. 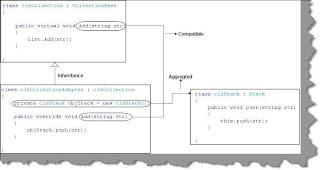 Figure :- Class adapter pattern
Note :- You can the above C# example in the adapter folder of the CD.


(I) What is fly weight pattern?

Fly weight pattern is useful where we need to create many objects and all these objects share some kind of common data. Consider figure ‘Objects and common data’. We need to print visiting card for all employees in the organization. So we have two parts of data one is the variable data i.e. the employee name and the other is static data i.e. address. We can minimize memory by just keeping one copy of the static data and referencing the same data in all objects of variable data. So we create different copies of variable data, but reference the same copy of static data. With this we can optimally use the memory. 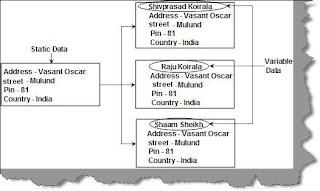 Figure: - Class view of flyweight
Figure ‘Fly weight client code’ shows we have created two objects of ‘clsVariableAddress’ class, but internally the static data i.e. the address is referred to only one instance.

Posted by Shivprasad Koirala at 2:44 AM

Thanks for gr8 information.
I found good resources of c#. Check this out