In the previous article we discussed about the fundamentals of IOC and DI design patterns.

In the same article we also discussed about how Windsor can be used to solve this problem. In this article we will take up a simple example and try to implement DI using unity application blocks thus resulting in loosely coupled architecture.

Any good architecture always stands on the base that components are loosely coupled… let me stress the point truly loosely coupled. Let’s try to understand this with a scenario and how we normally approach this problem using pure object oriented way. 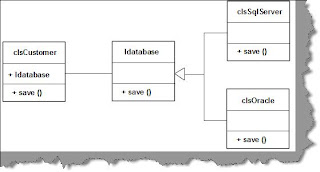 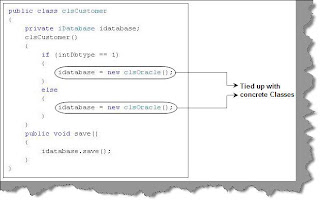 Here are the issues with factory which makes us force to think about some other solutions:-

• Everything is hardcoded: - The biggest issues with factory are it can not be reused across applications. All the options are hardcoded in the factory itself which makes the factory stringent to particular implementation.
• Interface dependent: - The base on which factories stands are common interfaces. Interfaces decouple the implementation and the object creation procedure. But then all the classes should implement a common interface. This is a limitation by itself again.
• Factories are custom: - They are very much custom to a particular implementation.
• Everything is compile time: - All dependent objects for an object in factory have to be known at compile time.

I will not be explaining factory pattern in case you are not aware of you can read the same in my previous article SoftArchInter1.aspx

Ok, I will show you a magic…Rather than writing those huge line of code for factory…lets go the DI way (Dependency injection).

Figure: - Dependency injection
Injection can be done using containers. So basically you need to put both the classes in to the container and the container will create object and inject the same in to the other class. 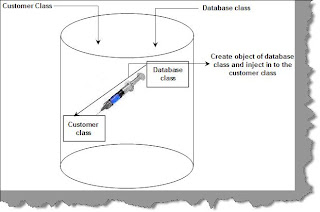 Figure: - Containers
With this your customer class does not need to worry about creating objects and knowing the concrete objects.


Now that we know the benefit of containers we will explore unity application block which helps us to achieve dependency injection.


The first step is to download the unity application block from http://msdn.microsoft.com/en-us/library/cc468366.aspx and install the same. Depending on whether you have 2008 or 2005 the documentation will vary. For this tutorial I will be using VS 2005 because majority professionals are still using 2005.

Figure: - unity block installed
Once you install the block you should be able to see the same in Microsoft patterns and practices.

The first thing you need to do is to get the references of at least two components Unity and Unity configuration. 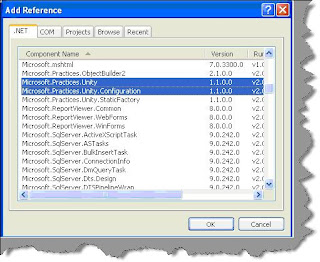 Figure: - Add referenced to Unity components
Once you have got reference to the components import the “Microsoft.Practices.Unity” namespace in to your code as shown in figure ‘Import unity namespace’.


In the customer class we will reference the interface and expose the public property using [Dependency] attribute. This exposure is essential for the unity container. Unity container needs some kind of gateway by which it can inject the object. So what we have done is we have exposed the interface ‘iDatabase’ publicly. There are lot of other ways by which we can achieve the same you can read my previous article on the different ways of providing injection gateways for containers
<<here>>. 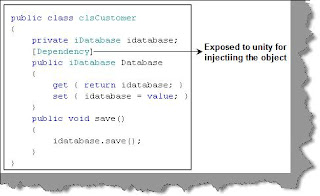 
To achieve high customization unity application allows us to specify how the injection will work in the config files ( web.config and app.config ). As this example is a windows command application we will be defining an app.config file.

You can see below a simple template of App.config file from unity perspective. The Configsection is compulsory and keep it as it is. The important section to be noted is the types section which comes under container section. In this we specify which interfaces map to which concrete class. The unity container creates object from this section and inserts in to the customer object through the dependency attribute.


The client code is pretty simple. The first step us we create the unity container object. In the second step we read the unity section. In step 3 we configure the container using the unity section data.
In step 4 we tell the container to create the customer object. This is the most important step of all. In this the container using the config data and the dependency attribute injects either the SQL server database object or oracle database object in to the customer class. This object creation depends on what is defined in the app.config file.

Finally in step 5 we call the save method


So what happens internally in the container is that the unity container creates the object of either oracle or SQL server data objects and injects in to the customer class through the dependency defined attribute. 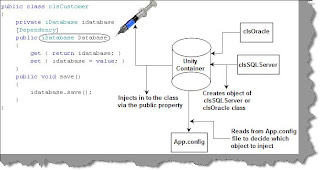 Figure: - The real fun
Posted by Shivprasad Koirala at 3:02 AM