(B) What are design patterns?

Design patterns are documented tried and tested solutions for recurring problems in a given context. So basically you have a problem context and the proposed solution for the same. Design patterns existed in some or other form right from the inception stage of software development. Let’s say if you want to implement a sorting algorithm the first thing comes to mind is bubble sort. So the problem is sorting and solution is bubble sort. Same holds true for design patterns.

(I) Which are the three main categories of design patterns?

There are three basic classifications of patterns Creational, Structural, and Behavioral patterns.
Creational Patterns
Abstract Factory:- Creates an instance of several families of classes
Builder: - Separates object construction from its representation
Factory Method:- Creates an instance of several derived classes
Prototype:- A fully initialized instance to be copied or cloned
Singleton:- A class in which only a single instance can exist

Behavioral Patterns
Mediator:-Defines simplified communication between classes.
Memento:-Capture and restore an object's internal state.
Interpreter:- A way to include language elements in a program.
Iterator:-Sequentially access the elements of a collection.
Chain of Resp: - A way of passing a request between a chain of objects.
Command:-Encapsulate a command request as an object.
State:-Alter an object's behavior when its state changes.
Strategy:-Encapsulates an algorithm inside a class.
Observer: - A way of notifying change to a number of classes.
Template Method:-Defer the exact steps of an algorithm to a subclass.
Visitor:-Defines a new operation to a class without change.
Note: - Just remember Music....... 2 MICS On TV (MMIICCSSOTV).
Note :- In the further section we will be covering all the above design patterns in a more detail manner.

(A) Can you explain factory pattern?

The client references only the ‘IInvoice’ interface which results in zero connection between client and the concrete classes ( ‘ClsInvoiceWithHeader’ and ‘ClsInvoiceWithOutHeader’). So now if we add new concrete invoice class we do not need to change any thing at the client side.
In one line the creation of objects is taken care by ‘ClsFactoryInvoice’ and the client disconnection from the concrete classes is taken care by ‘IInvoice’ interface. 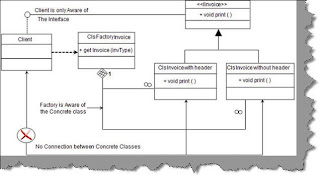 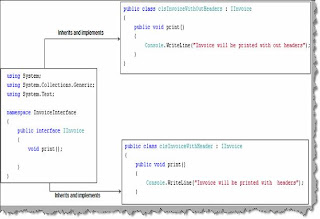 We have also introduced an extra class ‘ClsFactoryInvoice’ with a function ‘getInvoice()’ which will generate objects of both the invoices depending on ‘intInvoiceType’ value. In short we have centralized the logic of object creation in the ‘ClsFactoryInvoice’. The client calls the ‘getInvoice’ function to generate the invoice classes. One of the most important points to be noted is that client only refers to ‘IInvoice’ type and the factory class ‘ClsFactoryInvoice’ also gives the same type of reference. This helps the client to be complete detached from the concrete classes, so now when we add new classes and invoice types we do not need to recompile the client. 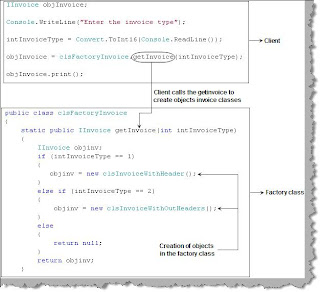 Note :- The above example is given in C# . Even if you are from some other technology you can still map the concept accordingly. You can get source code from the CD in ‘FactoryPattern’ folder.


(I) Can you explain abstract factory pattern?

A factory class helps us to centralize the creation of classes and types. Abstract factory helps us to bring uniformity between related factory patterns which leads more simplified interface for the client.

Figure: - Implementation of abstract factory
Now let’s have a look at how we can practically implement abstract factory in actual code. We have scenario where we have UI creational activities for textboxes and buttons through their own centralized factory classes ‘ClsFactoryButton’ and ‘ClsFactoryText’. Both these classes inherit from common interface ‘InterfaceRender’. Both the factories ‘ClsFactoryButton’ and ‘ClsFactoryText’ inherits from the common factory ‘ClsAbstractFactory’. Figure ‘Example for AbstractFactory’ shows how these classes are arranged and the client code for the same. One of the important points to be noted about the client code is that it does not interact with the concrete classes. For object creation it uses the abstract factory ( ClsAbstractFactory ) and for calling the concrete class implementation it calls the methods via the interface ‘InterfaceRender’. So the ‘ClsAbstractFactory’ class provides a common interface for both factories ‘ClsFactoryButton’ and ‘ClsFactoryText’. 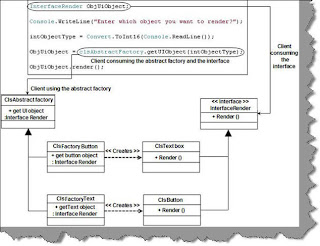 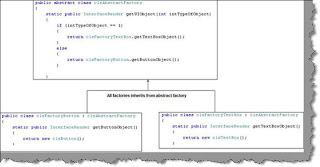 Figure: - Common interface for concrete classes
The final thing is the client code which uses the interface ‘InterfaceRender’ and abstract factory ‘ClsAbstractFactory’ to call and create the objects. One of the important points about the code is that it is completely isolated from the concrete classes. Due to this any changes in concrete classes like adding and removing concrete classes does not need client level changes.

Figure: - Builder concept
To understand what we mean by construction and representation lets take the example of the below ‘Tea preparation’ sequence.

You can see from the figure ‘Tea preparation’ from the same preparation steps we can get three representation of tea’s (i.e. Tea with out sugar, tea with sugar / milk and tea with out milk). 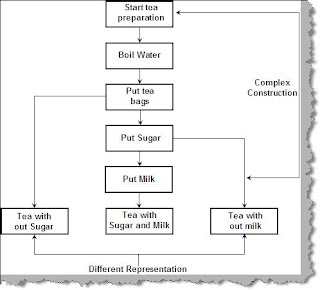 Figure: - Tea preparation
Now let’s take a real time example in software world to see how builder can separate the complex creation and its representation. Consider we have application where we need the same report to be displayed in either ‘PDF’ or ‘EXCEL’ format. Figure ‘Request a report’ shows the series of steps to achieve the same. Depending on report type a new report is created, report type is set, headers and footers of the report are set and finally we get the report for display. 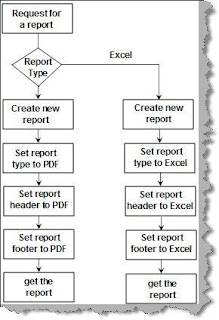 Now let’s take a different view of the problem as shown in figure ‘Different View’. The same flow defined in ‘Request a report’ is now analyzed in representations and common construction. The construction process is same for both the types of reports but they result in different representations. 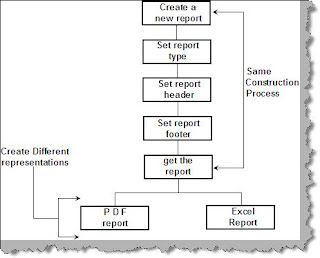 First let’s have a look at the builder class hierarchy. We have a abstract class called as ‘ReportBuilder’ from which custom builders like ‘ReportPDF’ builder and ‘ReportEXCEL’ builder will be built. 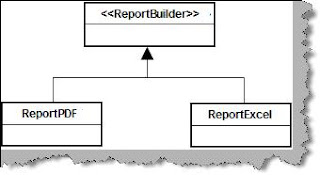 Figure: - Director in action
The third component in the builder is the product which is nothing but the report class in this case.

Figure: - The report class
Now let’s take a top view of the builder project. Figure ‘Client,builder,director and product’ shows how they work to achieve the builder pattern. Client creates the object of the director class and passes the appropriate builder to initialize the product. Depending on the builder the product is initialized/created and finally sent to the client. 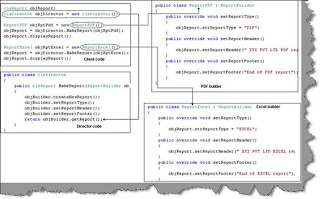 Figure: - Client, builder, director and product
The output is something like this. We can see two report types displayed with their headers according to the builder. 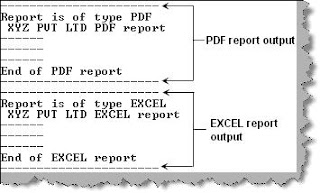 
Note :- In CD we have provided the above code in C# in ‘BuilderPattern’ folder.


(I) Can you explain prototype pattern?
Prototype pattern falls in the section of creational pattern. It gives us a way to create new objects from the existing instance of the object. In one sentence we clone the existing object with its data. By cloning any changes to the cloned object does not affect the original object value. If you are thinking by just setting objects we can get a clone then you have mistaken it. By setting one object to other object we set the reference of object BYREF. So changing the new object also changed the original object. To understand the BYREF fundamental more clearly consider the figure ‘BYREF’ below. Following is the sequence of the below code:
Now we display both the values and we have found that both the objects have the new value.

The conclusion of the above example is that objects when set to other objects are set BYREF. So changing new object values also changes the old object value.

There are many instances when we want the new copy object changes should not affect the old object. The answer to this is prototype patterns.

Lets look how we can achieve the same using C#. In the below figure ‘Prototype in action’ we have the customer class ‘ClsCustomer’ which needs to be cloned. This can be achieved in C# my using the ‘MemberWiseClone’ method. In JAVA we have the ‘Clone’ method to achieve the same. In the same code we have also shown the client code. We have created two objects of the customer class ‘obj1’ and ‘obj2’. Any changes to ‘obj2’ will not affect ‘obj1’ as it’s a complete cloned copy. 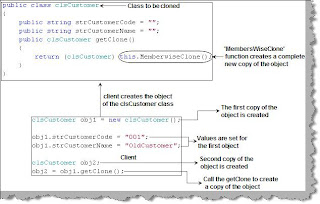 Figure: - Prototype in action
Note :- You can get the above sample in the CD in ‘Prototype’ folder. In C# we use the ‘MemberWiseClone’ function while in JAVA we have the ‘Clone’ function to achieve the same.

(A) Can you explain shallow copy and deep copy in prototype patterns?

There are two types of cloning for prototype patterns. One is the shallow cloning which you have just read in the first question. In shallow copy only that object is cloned, any objects containing in that object is not cloned. For instance consider the figure ‘Deep cloning in action’ we have a customer class and we have an address class aggregated inside the customer class. ‘MemberWiseClone’ will only clone the customer class ‘ClsCustomer’ but not the ‘ClsAddress’ class. So we added the ‘MemberWiseClone’ function in the address class also. Now when we call the ‘getClone’ function we call the parent cloning function and also the child cloning function, which leads to cloning of the complete object. When the parent objects are cloned with their containing objects it’s called as deep cloning and when only the parent is clones its termed as shallow cloning. 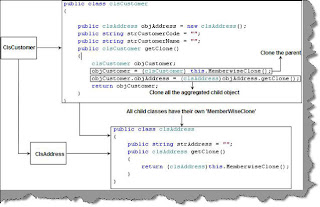 (B) Can you explain singleton pattern?

Below is a code snippet of a singleton in C#. We have defined the constructor as private, defined all the instance and methods using the static keyword as shown in the below code snippet figure ‘Singleton in action’. The static keyword ensures that you only one instance of the object is created and you can all the methods of the class with out creating the object. As we have made the constructor private, we need to call the class directly.


Note :- In JAVA to create singleton classes we use the STATIC keyword , so its same as in C#. You can get a sample C# code for singleton in the ‘singleton’ folder.

(A) Can you explain command patterns? 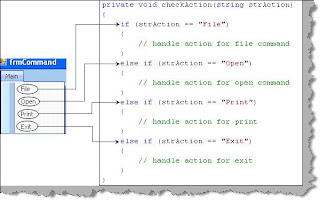 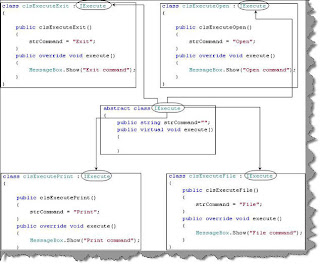 Figure: - Objects and Command
Using all the action classes we can now make the invoker. The main work of invoker is to map the action with the classes which have the action.
So we have added all the actions in one collection i.e. the arraylist. We have exposed a method ‘getCommand’ which takes a string and gives back the abstract object ‘IExecute’. The client code is now neat and clean. All the ‘IF’ conditions are now moved to the ‘clsInvoker’ class.

Figure: - Invoker and the clean client


Posted by Shivprasad Koirala at 11:05 PM

Nice to see blogs in this site from you.....

I am much benefitted from your Blog on Technical Content on UML.

Thanks You for writing good article on sharepoint / Design patterns