In this article we will understand MVP, execute a sample project with MVP, implement the same using windows UI and then finally we will discuss about the differences between MVP and MVC.

Pre-requisite
The simple stock project
Analyzing the project
So what’s the problem?
MVP (Model View Presenter) the solution
Implementing MVP in the stock project
The View
The simplest thing in the world the model
The complete flow for the stock project
Reusing the presenter in windows
The difference
Difference between MVC and MVP
Reference

This article assumes that you know MVC. In case you want to refer the MVC go
to the following article "The 3 Musketeers: Model, View and Controller using
HTTPHandler – Part 1 & Part 2"


The best ways to understand any architectural concept is by taking a small practical sample and then apply fundamentals on the same. So let’s first discuss a simple scenario and then let’s think how MVP fits in to the same. Below is a pictorial representation of a simple stock project. We can increase the stock value and decrease the stock value. Depending on the stock can have three status overstocked, under stocked or optimally stocked.

We have three scenarios depending on which the UI will change color.

What we will do is define the problem logic in two parts:-
• Presentation logic
• Business logic

The other responsibilities look fine let’s concentrate on the last responsibility which we have marked in red color where the UI needs to change colors depending on the stock value. This kind of logic in presentation is termed as presentation logic.

So what’s the problem?

If you look from a generic perspective the work responsibilities allocated to the business object and the user interface look fine. There is slight concern when we look at the presentation logic.

We have three big problems:-

Problem 3 will get solved if we solve the first two problems.

Implementing MVP in the stock project

All events are first sent to the presenter. So all the events needs to connect to some methods on the presenter. All data needed by the UI i.e. in this instance we need the stock value and the color should be defined in the interface so that presenter can communicate using the same.

The presenter class will aggregate the view class. We have defined an ‘Add’ method which takes the view object. This view will set when the ASP.NET page starts.

We had also talked about moving the presentation logic in the presenter. So we have defined the ‘ChangeColor’ method which takes the status from the ‘Stock’ object and communicates through the view to the ASPX page.

Now let’s understand how the UI will look like. The UI either it’s an ASPX or windows should inherit from the stock view interface which we have previously explained. In the page load we have passed the reference of this page object to the presenter. This is necessary so that the presenter can call back and update data which he has received from the model.

As we have inherited from an interface we also need to implement the method. So we have implemented the ‘setStockValue’ and the ‘setColor’ method. Note that these methods will be called by the presenter. In both the buttons we have called the ‘increaseStock’ and ‘DecreaseStock’ method of the presenter.

The simplest thing in the world the model

The model is pretty simple. It just increments and decrements the stock value through the two methods ‘IncrementStock’ and ‘DecrementStock’. It also has a ‘getStatus’ function which tells what is the stock level type i.e. over stocked, under stocked or optimally stocked. For simplicity we have defined the stock value as a static object.

The complete flow for the stock project

Below is a complete flow of the stock project from MVP perspective. The UI first hits the presenter. So all the events emitted from the UI will first route to the presenter. Presenter will use the model and then communicate back through the interface view. This interface view is the same interface by which your UI will inherit.

Reusing the presenter in windows

To just show how magical the presenter is. I have reused the same presentation logic in a windows application. 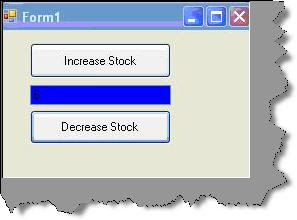 In the below sample we have ported the same presenter logic in a windows application.

You can understand the difference of how consuming the model objects directly and using a presenter varies. When we use the presenter we have moved the UI presentation logic to the presenter and also decoupled the model from the view.
Below is the code in which the UI directly uses the model…Lot of work right. 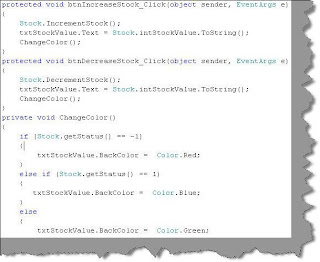 With presenter all the presentation logic is now centralized 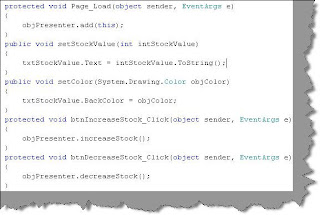 Difference between MVC and MVP 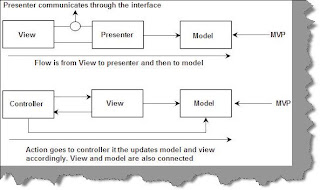 The above figure summarizes the difference between MVP and MVC. We have just summarized the figure in tabular format below.

The Web and windows samples are shown to show how we can reuse the presentation logic.
You can get the source code from here

It would selfish to say that all the above knowledge is mine. Below are some link which
I have referred while I was writing this article.

Posted by Shivprasad Koirala at 12:58 AM